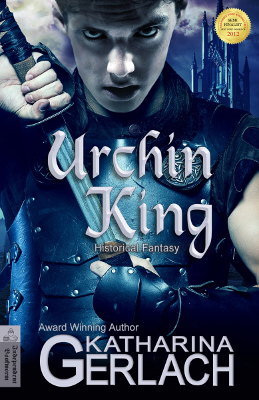 Paul loves his surrogate family, a group of street urchins. They take him in when he is banned from the loving embrace of his foster mother at age five. During the next ten years they learn together how to blend in, how to become invisible, how to climb the steep walls of the nobles‘ gardens, and how to vanish in the narrow alleys behind the capital’s timber frame houses.

But on Mother’s Day, when the king begs the goddess for a miracle, Paul’s life changes forever. Without his friends he must face new danger … the life of a crown prince.

And if the king discovers his secret, the executioner’s ax waits for him.

For lovers of medieval knights and fantasy from 12 years up

A few words from the Author

I wrote this book for my three nephews when they were in their early teens and disliked stories with strong love elements and overly emotional emotions. So there is NO real love story in this book.

„Urchin King“ was a semi-finalist for the „KBR Best Indie Book 2012“ award. The 2012 Best Indie Book Contest was established and judged by the reviewers at The Kindle Book Review. They screened hundreds of books and judged them on formatting, writing quality, and whether the book “grabbed” them from the beginning.

However, the original cover was crap. In the following years the cover underwent several overhauls. Some of the old covers might still be floating around the web. The content of the book hasn’t changed.

If you click on the embedded YouTube-video a connection is made to Google’s servers. That will allow Google to store cookies in your Browser’s cookie folder and gather information to be sent to YouTube.