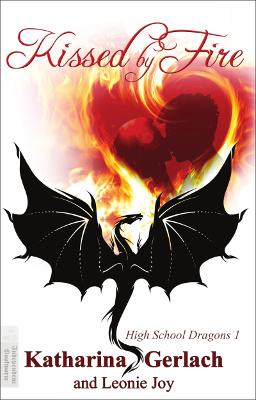 a love story with dragons

The flames of a car crash have killed Lydia’s parents and erased her former life from her mind. No matter how much she tries, all she remembers is the agony of losing her family. To be able to go on, she seals her emotions in a hidden corner of her mind. She no longer cares that she’s got to live with a foster mother or that she must to go to school again. The world has lost all color, all scent, and all sense.

But on her first day in Hilldale High School, she meets two young men that break through her barriers. Harm – strong, dark, and strangely old-fashioned, with a scent of smoking wood – lights up her senses. His mere presence forces her to face life again rather than the numbness of the half-life she chose. And then, there’s Colin, whose gentle jokes and easy camaraderie soothe her soul and fill her with peace.

When a waste paper basket spontaneously ignites on its own, Lydia begins to dream of dragons. Now, the world she thought she knew confronts her with riddles she can only solve if she frees the memories she’s bottled up so securely. Will she be able to find out who she is and what she wants before her past catches up with her?

I developed this fantasy romance series with one of my children, aged 15. We deliberately targeted the idea and its execution at young-ish teens (and those who are still that age at heart). It is planned as a trilogy (no endless series for me, thank you) and will feature a different couple’s love problems in each volume while simultaneously adding to Lydia’s journey as a potential queen. We both sincerely hope you’ll like these stories.