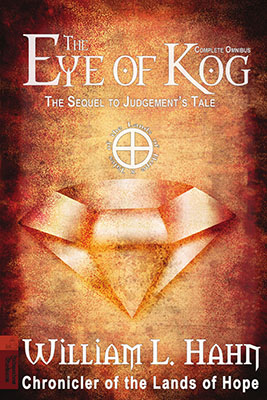 …and twenty centuries of peace in the Lands of Hope are shattered. But in the chaotic Percentalion, evil’s return goes unnoticed by all but a few. The grim young scholar Solemn Judgement, sails and walks a circuit of the northern kingdoms, in search of lore to fend off the plague of undeath. Meanwhile, the Woodsman Treaman struggles to guide his adventuring party to safety, but instead encounters deep loss and inherits a quest to pit all of their lives against desperate odds.

The demon Kog, formerly ruler of these lands, searches for his lost Eye which will render him again invincible. His uneasy ally, the liche Wolga Vrule, schemes to expand his undead army and overwhelm the unsuspecting kingdoms in his own bid for power. What part can a discovered scepter or a missing crown, a dwindling holy order of knights, a ghoul-guarded tomb, or an ancient prophecy play in the chance to ward off such threats?

The quest begun in Judgement’s Tale reaches its climax