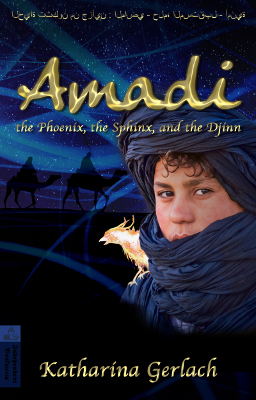 Amadi enjoys the busy frenzy the souk and tries to escape the harem her stepmother rules as often as possible. Unlike her sister Bülbül she feels caged, not protected. When Bülbül becomes engaged against her will, Amadi longs to evade a similar kismet.

Luckily a master thief wants her as an apprentice, and she grabs the chance to live like a boy. Too bad that she and her teacher become targets of a jackal-headed god of death and an assassin when they accept an assignment from a magic-using customer.

Who wants them dead so badly remains a mystery she must solve to survive. And now that she fell head over heels in love, she very much wants to live. With her life spinning out of control, will her skills be enough to save her … and, maybe, the caliphate too?

For readers of fantasy from 9-99 years.

A few words from the Authoress

This book grew from a short story I wrote a few years back. Beta-readers loved the story but though it too short to truly develop the world. First reluctantly, then with more and more enthusiasm, I reread the Tales from the Arabian Nights, studied books about life in Arabian countries (after all I didn’t want to step on anyone’s toes), and developed the plot. Writing Amadi’s adventures went surprisingly fast. I hope you’ll find some of my fascination for this intriguing culture in this book.